March 29, 2009—I can’t believe how long is has been since my last blog entry, which was March 5. We hauled the boat on March 2 and then spent the next three and a half weeks working on our “list.” While the boat was in the yard, we stayed in the motel just adjacent to the marina. That made it very easy to get from the room to the boat, and it also gave us a place to stay while I was varnishing the interior of the boat.

Our projects included stripping, sanding, and putting on four coats of varnish on the cap rail; sanding, faring, and painting the bottom; waxing and buffing the hull sides; removing two thru 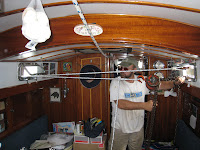 hulls, patching the fiberglass, and installing three new thru hulls; installing a new head and all head piping; replacing the cutlass bearing; repairing the propeller shaft; installing new throttle and transmission cables, installing rudder shaft packing; cleaning and polishing the rudder quadrant and rudder shaft; sanding, grinding, filling, and painting new non-skid deck paint; installing nine new port lights (after removing the old ones—Steve had to use a chain fall from one port light to the port light on the opposite side in order to break the adhesive loose); installing the new main sail; stripping, sanding, and painting the salon floor boards; installing a new alternator; reinstalling the high frequency radio; and sanding and varnishing all interior teak.

We worked eight- to ten-hour days and were so tired at the end of the day that all we could do was eat some dinner, watch an hour of TV, and then crash for the night. All-in-all we were pretty boring people. We did, however, have a chance to catch up on “American Idol.”

The morning of March 26, we got up early and waxed and buffed the hull before Carl showed up to put the boat in the hoist. She went back in the water around 10:30, and we pulled back into our old slip without any problems. The engine ran just great, which was a relief. Our only major problem was an elderly local who was sculling, and he kept getting in front of our boat while we were trying to navigate back to our slip. We joked that the headlines would be, “Local run down by crazed Yank.” 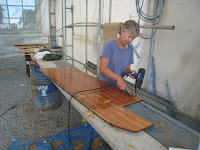 Right now the floor boards are all out of the boat and in the paint shed. We spent all day scraping and sanding the boards. On Monday, Gavin and his crew will begin putting on four coats of polyurethane, which will make them look much better. The problem is that with the boards gone, we have large and dangerous openings in the floor of the boat that we have to step around all the time. Steve was able to cover some of them so that we can get around better. Hopefully, we won’t get up in the middle of the night and forget about them.

Yesterday morning Steve painted the sole of the boat since the boards are all gone, and then we headed up to Opua for the afternoon to see several cruising friends. It was a beautiful day, and we had a great time catching up on their plans for the coming season. 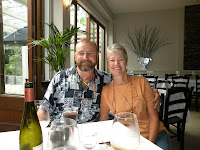 Earlier in the month, we took a drive south with Sally and Geoff from sv Grace and enjoyed a lovely lunch at an Italian Restaurant. We also stopped at Silver Heron Winery to taste some wine and then moved just up the road to the ice cream store--both were wonderful.

We also treated ourselves to an evening at the Weber Brothers 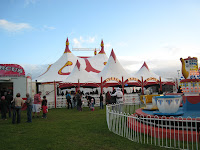 Circus. A huge circus tent was erected just down the street, and we were able to get front row center tickets for just $33 NZ each. The performance was very much like Circus Soleil . There were no animals, but the performers did acrobatics, balancing acts, magic acts, clown skits, arial acrobatics, and a trapeze performance. It was a thoroughly entertaining evening complete with corn dogs, slushies, and popcorn. 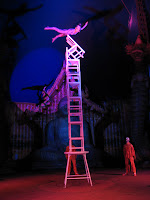 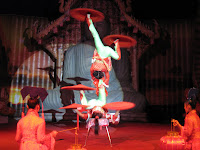 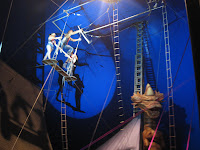 We have set April 6 as our departure date from this marina so we will have another very full week ahead. We plan to sail down to Auckland and then out to Great Barrier Island. As soon as we are traveling again, I will be sure to post blogs much more frequently.
Posted by s/v Linda at 1:29 AM No comments:

Hard at Work in Whangarei

March 10, 2009—Before I write about all our boring boat projects, I wanted to say a little something about traveling here in New Zealand. This country has made it pretty easy to move around. There are buses, trains, and flights to just about any destination. The highways are mostly two-lane, but there are regular passing lanes to help keep traffic moving. On most of the roads that we traveled, the bridges were all one-lane; however, signs mark who has right of way. Rarely did these bridges delay us for more than a minute. Every town we went through that clean public restrooms on the main street, and there was almost no trash along the roads. It was lovely traveling through this beautiful country, and we thoroughly enjoyed every place we went. The people were wonderful! 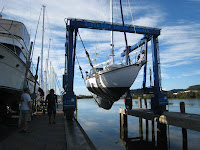 Since returning to Whangarei we have been working on our boat projects. We finished installing our new large windows, and they look great. Best of all—they don’t leak. The boat was pulled on March 2, and we began work on our long list of projects.

We are actually going through a pretty big refit as we do not want to have any substantial projects for the next few years. Projects we have done or are underway include the repainting of the mast as well as the servicing of all lines, cables, and sheaves, ordering a new main sail and new port lights 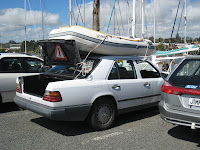 , new non-skid deck paint, new rigging hardware, striping and painting the teak cap rails, re-varnishing all the interior, cleaning fuel injectors, installing a new toilet, a complete checkout of our engine (by a real diesel mechanic), dinghy repairs, and several more. The one good thing about doing all our repairs is that the U.S. dollar is very good right now at almost $0.50 NZ = $1.00 U.S. whereas a year ago it was $0.80 NZ = $1.0 US. So, while the economy is not good, the cruisers are spending more this year than last just because of the good value. 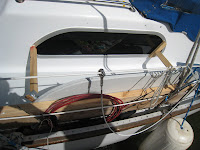 We have been very pleased with the workmanship here, and the price for services is fair. We have found that the professionals here want to make a good living but not rob us blind. Many times they have offered alternative solutions to buying something brand new. They are also great about sharing their expertise and their “tricks of the trade.” 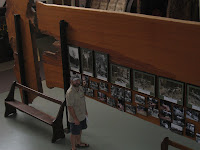 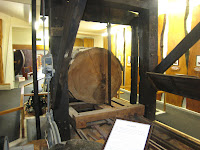 industry here. The huge Kauri trees are truly amazing. The picture on the left shows Steve standing beside a slice from a Kauri tree. They also had wonderful exhibits of clothing, machinery, and other items. We thoroughly enjoyed ourselves.

We also took off on Thursday and about ten of us hired a van, and Stan from Stan’s Vans drove us down to Auckland to attend the New Zealand Boat Show. It was small by U.S. standards, but we did enjoy ourselves and found some interesting items. When we left Whangarei it was raining heavily. The return drive was a bit “scary” because it had rained all day, and everything was very wet and slick.

While we are in the yard, my blogs will be somewhat sparse as we are pretty tired after working for 8 hours, climbing up and down a 10-foot ladder, sanding, etc. Hopefully, we will be done in the next week or two.
Posted by s/v Linda at 1:13 AM 1 comment: