January 1, 2010--It is so strange to type 2010. It seems just a short time ago that it was 2000. Steve and I were watching a New Year's show last night, and the hosts were discussing where they were and what they were doing in 2000.
We talked about the fact that in 2000 we had owned sv Linda for almost two years, and we were working very hard to prepare her for our cruising dreams. In 2003 we moved her back up to Washington State, and in July 2004 we retired, moved aboard, and began our cruising.
Our travels have taken us through the San Juan Islands, up to British Columbia and Juneau, Alaska, and then down the west coast and under the Golden Gate Bridge to San Francisco. From there we continued on to San Diego and then headed south to Mexico, where we spent two seasons.
On March 15, 2008, we left Mexico and sailed through the South Pacific to New Zealand. In May of 2009 we left New Zealand and returned to Tonga to cruise the southern group. We crossed to Fiji on June 10, where one of our boys, James, joined us for a week. We liked it so much that we decided to spend the rest of the season enjoying this beautiful area.
Most of you who have been following us know all of this, but it is fun to remind ourselves of what we have done. During our travels we have met some of the most wonderful people and fellow cruisers--very diverse and very interesting--from many countries. As we realled the past few years, we were reminded of just how blessed we are to be able to do what we are doing. It took a lot of planning and hard work, as well as a little luck, but it was worth it.
The highlight of the past year; however, was the birth of our first grandchild Riley. All our kids, along with Riley, were with us for the holidays, and we thoroughly enjoyed the time with them. We also watched as Riley was baptised at our church on December 20. 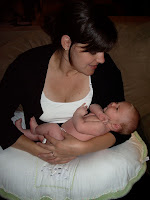 We leave on a driving trip up to Seattle in a few weeks and look forward to visiting with old friends, cruising friends, and family along the way.
We want to wish everyone a very happy and prosperous New Year. Thank you for following our blog and for all your comments. We love receiving them and hope that they will continue. I will post the next blog right before we leave the states on February 23.
Posted by s/v Linda at 5:10 PM No comments: