March 30, 2010—On the 22nd we left Vuda Point Marina and headed out to Musket Cove in order to find some cooler temperatures. We have been there several times, so it was no problem getting through the reefs and into the mooring field.

After picking up a mooring ball, we sent ashore to register and walk around. The last time we were here, it was filled with cruisers, but now there was just one boat in the anchorage with us. We planned to relax, but, unfortunately, our refrigerator was still giving us trouble. That kept Steve busy trying to figure out what the problem was. 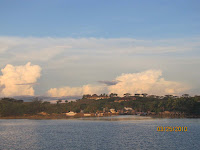 We spent five days out at Musket, and most of them were still pretty hot. We enjoyed buying ice cream (an Eskimo Pie type), but we had to eat it so fast that it was not much fun. We both lost large pieces of chocolate in the sand because pieces would slide right off the ice cream that was melting just a bit faster than we could eat it. We also swam every day in water that was a warm 88 degrees. On two nights we went in to barbeque at the Island Bar with some fellow cruisers who had come out to Musket.

Late on Friday we decided that we had a definite problem with the reefer. The freezer compartment was thawing, and we had quite a bit of meat in it, so we left on Saturday morning to return to Vuda Point in order to deal with the problem. We pulled into a slip without any problems and got the boat all tied off. Steve then proceeded to research the best way to order in a new refrigerator. It is never easy when one is in a foreign country. Millie, who owns the general store here, was kind enough to let us put our meat in her freezer—right below the ice cream. I think she had a plan to get us to buy ice cream every time we got out some of our meat.

We also began work on a stainless-steel arch for the stern of the boat. The solar panels are a hazard on the side rails, and the back deck is quite cluttered, and since we received a good estimate to have the work done here, we decided to proceed with that work as well. Today we had to turn the boat around in the slip—always an entertaining venture as our boat does not back up worth a darn—so that it would be easier for the workmen to place the arch on the deck. Steve and I then removed the solar panels and the wind generator.

We hope to have the arch by early next week. We also want to take a trip to Suva to handle some business and do some shopping. We are able to rent a car from the taxi driver here at the marina so we will drive ourselves there and back, and that should be an exciting adventure.
Posted by s/v Linda at 9:57 PM 1 comment:

March 19, 2010—Tomas stayed east of Viti Levu Island so the weather was not nearly as bad as we expected. On Tuesday, Steve and I woke up early because the wind had picked up. Around 9 a.m. we decided to walk out to the point at the entrance to the marina. We were amazed at how light the winds out there were until we walked out from behind the yacht club building. The wind then hit us at what we believe was about 40 knots. We enjoyed the view and took pictures and videos even though it was raining lightly. As usual the pictures don't really show the actual conditions, but at least they give some idea of what it was like. 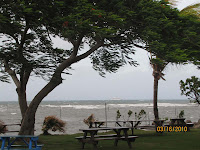 The seas were rough; however, that didn’t keep a cruise ship from leaving port that morning, so we 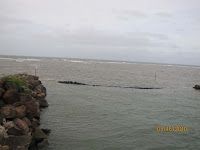 watched as it moved north past the point. All the boats in the marina had been well secured, and the surge gate had been put into place at the breakwater for the marina. The surge gate is a string of tires on their rims that are chained together. It really helped to dampen the waves entering the harbor.

When we arrived back at the boat, we decided that the winds inside the marina were at about 20 knots so the marina basin was very well protected from the wind and waves, especially since they were not coming from the west. The rest of the day was pretty benign, and by Wednesday the weather had cleared up considerably. By Thursday we were undoing all our cyclone preparations and returning the boat to normal. 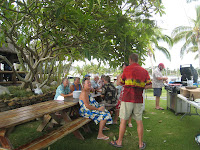 We have worked with another couple to schedule a party this evening for the yard workers who put in so much effort to make the boats secure. The cruisers paid for the meat, the kava, and two side dishes. The yacht club made the two side dishes for us, and they let us use their barbeque facilities. 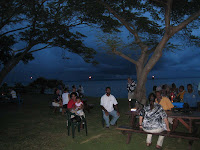 We had a good turnout, and some of the workers brought some family members. Peter from sv Nightcap made kava. The kava bowl was an old float with the top cut off. The top then became the bottom to hold the bowl in place. Steve did the cooking on the barbeque—lamb chops, pork chops, and bangors 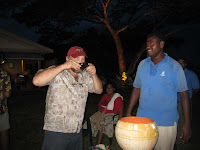 (sausages). Several of us ladies baked desserts so there good food for all. It did rain a bit during the meal; however, that never stopped anyone from eating or drinking kava. We all expressed our thanks for them, and everyone went away full. Some went away a bit tipsy from the kava.

We will leave for Musket Cove tomorrow so that we can get a break from the heat here in Vuda. The forecast looks good for awhile, and Musket is only two hours away, so we can come back here if the weather turns ugly. I plan to post blogs every couple of weeks until we leave Fiji around the first of May.
Posted by s/v Linda at 11:53 AM No comments:

March 16, 2010—About five days ago we started watching a weather system developing north

and east of us. It then became tropical cyclone Tomas, and it was predicted to move over Vanua Levu sometime on Monday, which it did. We are on Viti Levu which is south and west, and it looks as though this system will not go right over this island. In addition to Tomas, tropical cyclone Ului was out to the north and west of us.
We have spent the past two days preparing the boat for this cyclone. We took down our sun awning and jib sail. We lashed the main sail to the boom, tied down our solar panels, put out our large fenders, and cleared the decks of anything that was loose and could become a flying object. We doubled our dock lines and attached them to large stakes that the marina has all around the berths. We also put out an additional aft line, which the men at the marina tied to the large center ring that is in the water in the middle of the circular marina. There is also a surge gate that will be placed at the entrance of the marina in order to reduce the waves as they enter. The people here have worked very hard to make sure that all the boats are as secure as possible. 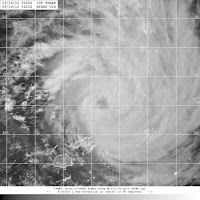 This morning around 7 o'clock the wind picked up, and we had a very light rain. The weather report last night indicated that Tomas would head a bit east, which was good news for us, but we will just wait to see what happens—it should be interesting. Ului seems to have moved south and away from Fii. That was also good news.
If you look at the bottom of the picture just left of center, you will see the islands of Fiji. This was taken on March 14.
I will post another blog in a few days when this systems moves on.
Posted by s/v Linda at 1:26 PM 2 comments: