December 6, 2010—We left Penang on November 26 at 6:45 in the morning because we had about 58 miles to cover during daylight. We began to pull our anchor, but half way through the process our anchor windless quit so Steve had to pull in the last 100 feet of chain up by hand—not a fun job. As soon as he got the anchor up, we headed north toward Langkawi.
The shipping lane created some concern for a few miles, but soon we were clear of it and only had a few fishing boats along the way. We enjoyed some wind along the way and that helped us to motor sail at a good speed. The seas were calm, but it was unusually hot. It was amazing how many jelly fish we saw along this route. At first they actually looked like plastic trash bags, but when you took a closer look, you could see the body with the long tentacles floating by. 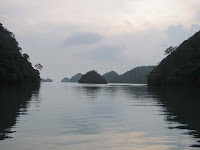 We arrived at the “Fjord” anchorage around mid afternoon and dropped our anchor in 40 feet of water. There was just one other sailboat in the anchorage, so it was perfect. The landscape reminded us of the Pacific Northwest, only warmer. We decided to take a quick swim, so we checked for jellyfish and then went in for a cool dip. That evening we just enjoyed the quiet surroundings and the stunning landscape. 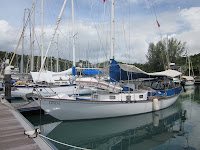 We had planned to spend four days in this group of islands; however, the next morning Steve suggested that we just go ahead and call Rebak Resort to see if we could get our slip a few days early. I called on the cell phone, and Rebak said that we could come in early. Finding the entrance to the marina was another story. We had the coordinates; however, it was hard to see until we were right at the entrance.
We entered at low tide so we had just 8.5 feet of water under the boat. We were assigned to slip B-26, but the B dock was hard to see, and the dock worker had not come down to meet us just yet. We ended up going around a very wide catamaran and then pulling into our slip with “no fuss, no muss.” It felt good to tie up to a good, solid marina and park the boat. We immediately got our lines tied 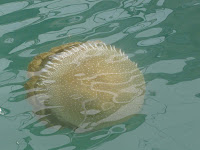 and made sure that they were secure. We also put up our shade awning to keep the temperature in the boat down. We did have electricity and water, which was a treat after so long without it. In the late afternoon I looked down in the water by the boat, and I saw a huge jellyfish. It was beautiful so I took a picture. I have since found out that the jellyfish in these waters can be fatal so we will be more careful in the future.
Rebak Marina Resort was hit by the 2004 tsunami. The wave came in the entrance and created a toilet bowl effect. Two docks were taken out and all boats were pushed around. Luckily, none were sunk and no one was seriously injured. Unfortunately, it has not quite returned to its former state. 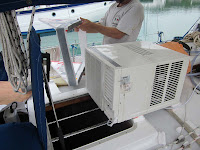 Two days after we arrived, I saw an ad posted at the laundry for an air-conditioner. Brian and Jackie on board Songster are leaving for the Red Sea in order to complete their circumnavigation. They are both in their seventies and are wonderful Brits. About four days later we received the AC, and we spent a few hours modifying the hatch opening for our boat. We have found “heaven.” The AC keeps us cooler and lowers the humidity as well. While we are gone to the states for Christmas, it will help to keep the humidity down and thus reduce the mold growth inside the boat. It was well worth the money that we paid for it.
One day we took the ferry across to the main island of Langkawi, where we rented a car (if we dared to call it that) for only 40 RM or about $13 USD. We drove about 30 miles to the Royal Langkawi Yacht Club to see sv September and sv Black Pearl, both of whom are from Austria and to enjoy lunch before heading off for duty-free shopping in town. We were also amazed to find some excellent hardware stores and one boat chandlery. 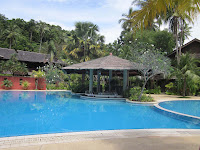 We have spent the past 10 days working on the boat, but at a more relaxed pace. We have enjoyed sitting by the swimming pool and spending time with of some of the many cruisers that we met during the Indonesia and Malaysia Rallies. Some boats will go on this year, and others will spend a year in Malaysia and then leave the next year.
We logged 6, 385 miles since leaving Fiji at the end of April. We have traveled to Vanuatu, the Louisiades and Port Moresby on Papua New Guinea, the Torres Straits, the north coast of Australia from Thursday Island to Darwin, then Indonesia, which included Banda (Spice Islands), Wakatobi, Bau-Bau City on Buton, Bone Raté, Flores Island, Gili Islands including Komodo Island, Lombok and Bali Islands, Kumi on Kalamintan (Borneo), Belitung, Batam, Singapore, and finally the entire west coast of Malaysia to Langkawi, which is on the border between Malaysia and Thailand.
It has been an amazing season, and we have been exposed to so many wonderful experiences and friendly people. Our best experiences were in Indonesia. The people, the culture, and the landscape were all so exceptional that we were saddened to leave. Now we are anxious to go home to visit family and friends and to enjoy Christmas in New Mexico. I will post my next blog on the first of February after we return from the states. We would like to wish all our friends and followers a very Merry Christmas and a Happy New Year.
Posted by s/v Linda at 12:39 AM 3 comments: