June 22, 2011--The latest news is that we have received, and have accepted, an offer on sv Linda. Now we are waiting for the sea trial and survey to be done on July 2 and 3. We have spent our time taking care of a few last minute small jobs; but, other than that, she is in fine shape.
Last week James’ wife Ling drove four of us ladies to town to get a 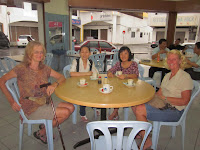 shampoo and cut. The salon turned out to very nice, and the man who cut my hair did a fine job. All of us were a bit surprised, however, at the price. My cut (no shampoo) was 22 RM—that amounts to about $9. Now that may sound like a bargain, but for this part of the world it is a bit pricey.
We continue to go to lunch every few days with Gary, Wendy, and James. We have found a bakery that has amazing baguettes, egg tarts, blueberry cheese tarts, and rolls; but, actually, we are trying not to go there too often as all the good food is beginning to take a toll. We also found a great restaurant called Foos Steak House that has wonderful steak sandwiches on homemade bread.
We took the ferry across to Pangkor Island with Gary and Wendy for lunch one day, only to find that our favorite restaurant was closed. We decided to eat at another one of the local eateries, and we enjoyed soup, chicken and rice, noodles, and barbecued pork. The food was very good, and we were pleased until we received the bill. The total was 58 RM, which is about $18. We questioned the bill, and, luckily, the woman had written the amounts down on a piece of cardboard. Instead of 4.50 RM for the chicken and rice, she wrote 45 RM. We pointed out the mistake, saying that it was the most expensive chicken and rice we had had in Malaysia. All the people working in the restaurant laughed, and the one man who spoke English said that it was a mistake. We knew that it wasn’t, but we just smiled, paid our bill, and left. 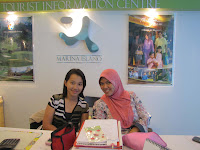 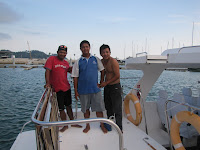 t will go home with us. James has been gracious enough to let us store our bags—all eight of them—in a room in the office. The only problem with packing things up is that no sooner have we cleared it out than Steve needs a tool or something else to finish up a chore. The two ladies in the office, Akina and Azira, are very good natured about our coming in to get something out of a bag and then returning it to the bag the next day. The three dock workers, Shar, Adam, and Bear, are also very helpful with anything we might need.
Now we will just wait until the first weekend of July. Hopefully, everything will go smoothly, and then we will fly home on July 7.
Posted by s/v Linda at 12:17 AM 4 comments:

June 12, 2011—It has been busy for the past few weeks. As we work on the boat, we keep finding little things that need some work. The temperature has become even warmer so we are even more grateful to have the air conditioner. Any outside work, such as putting Cetol on the caprail or cleaning the decks, is done before nine o’clock. After that the surface of the caprail or the deck becomes too hot to work on.

We have unloaded all the aft lockers, and then Steve cleaned them and put on a new coat of paint so now they look very nice. We also took out all the sails and made sure that they were clean and had no mold on them. We then neatly repacked each locker. We also spent some time cleaning out the bilge, which had become a bit dirty.

I have spent quite a bit of time packing items that we will be taking home into suitcases. James, the marina manager, has been kind enough to let us store the bags in a locked room at the office. This has allowed us to move any unnecessary items from the boat to reduce the clutter. Before we leave, we will have to weigh the bags, as they have to be less than 50 pounds, and redistribute items as necessary.

One day about a week ago, James asked Steve if he would like to go fishing, which he did. Steve, Gary, Daniel, and Daniel’s oldest son all hopped on board. They left around 5:30 in the evening and returned around 9 o’clock. Steve had caught a lovely Queen fish, which is a nice, white meat fish. All together the guys caught 40 small tuna. We immediately set up a barbeque to cook the fish. Wendy brought some salad, I contributed some bread, and we all enjoyed a lovely meal. Some of the tuna became sushi, which as excellent. Daniel’s wife Hiro brought seaweed to wrap the rice in, and when you added some tuna, it was excellent. 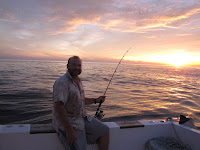 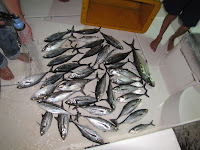 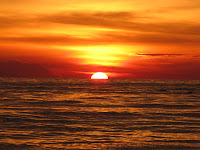 On June 5, all the cruisers on the dock were invited by Mr. Ding, a part owner in the marina, to 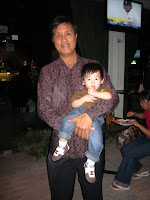 his grandson’s first birthday party. We first met Mr. Ding at the Methodist church on Easter Sunday when we learned that his son’s wife had passed away recently leaving his son with a three-year-old daughter and a one-year-old boy. The son and his children live with Mr. Ding and his wife, and they seem to be a very close family.

Mr. Ding had arranged the dinner party at the Bar Restaurant, which is on the second floor of the main building and overlooks the ocean. We have seen some beautiful sunsets from there, and that evening was lovely as 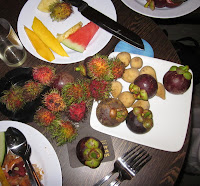 well. We enjoyed the traditional food of fried rice, fried noodles, prawns, fried chicken strips, small hot dogs, watermelon, and pineapple. Mr. Ding also brought some other wonderful fruit, of which I cannot begin to remember the names, to our table for us to enjoy. To finish it all off, we enjoyed a cream cheese birthday cake.

A couple of days ago we joined Gary, Wendy, and James and went to Fat Man’s Curry Restaurant. Now the name would imply that it has Indian food, but, actually, it is a Chinese restaurant that is owned by a large Chinese man and his wife. We enjoyed wild boar in red wine sauce, bok choy, and a tofu dish, along with rice and a local beer. It was all very good, and we were especially surprised at how good the boar was.

It is overcast today, which helps a bit with the heat, but the humidity is definitely higher. The night before last we had quite a bit of thunder and lightning during the evening, but, luckily, the wind never blew very hard. Last night we again had a bit of rain, but nothing very significant.

We plan to return to the states the first week of July, and we will just wait to see if anything happens with the boat. We may take a quick trip somewhere, but it all depends on the schedule with the boat. Things are pretty low key right now, but I guess that it won’t kill us to take it easy for awhile.
Posted by s/v Linda at 8:06 PM 6 comments: