July 10, 2011--Our trip home was a challenge, to say the least. We repacked our bags the night of July 5 for the last time. We had to fit some clothes and other personal items that we had been using. This meant, of course, that we ended up having to shift some weight from some bags to other bags. We spent another three hours rearranging items until each of our NINE bags weighed no more than 50 pounds. Thank heavens for the scale that Wendy and Gary lent us. We thought that we would be bored our last day in Malaysia, but that was not the case.


The next day we got ready to leave, and then James picked us up at noon to take us to lunch along with Gary and Wendy. We ate at Lido's Restaurant where we enjoyed delicious fish, steamed potato leaves, pork, and rice. We had heard so much about this restaurant and how good the food was--it was the truth.


After lunch James dropped us off at the Star Shuttle Company, and we drug our nine bags plus four carry-on bags into the lobby. The people working at the counter could not believe how much baggage we had. Luckily, they did not charge us any extra for excess baggage. Our bus was about 30 minutes late in departing; however, the bus driver made excellent time so we arrived at Kuala Lumpur International Airport around seven that evening. We had to get two trolleys in order to move all the baggage and finding an empty elevator became quite a feat, but we finally managed to nab an empty one that had enough room for the two of us.

We had to stand in line for about an hour before we could check in, and unloading our nine bags 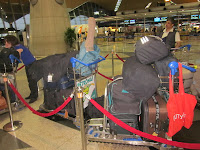 at the counter became another interesting exercise. We had to pile all nine bags on the scale at the same time in order to weight them, so we had a very large pile sitting on the conveyor belt. When the agent finally figured out the charge for our excess baggage, it came to $750--ouch, that hurt!

After that ordeal we walked to Burger King where we enjoyed a Whopper with fries. It tasted so good and would help to hold us over until our next meal.

We went to the gate and tried to relax until our flight, which left at 10:50 p.m. We boarded on time and found our seats. We were carrying Steve's guitar so I had to ask the flight attendant if I could put it in a safer place than the overhead compartment. She was very helpful and placed it in the closet with the flight crew's jackets.

Our flight from KLIA to Tokyo took about seven hours. We had two seats together so it was not too bad, and the flight was not very full either. When we arrived in Tokyo, however, we were still pretty stiff from sitting for so long. Our first stop was to find the day room that we had booked for seven hours. We checked in and found the room to be very clean with two beds and a bathroom including a shower. We immediately climbed into bed and slept for the next four hours. 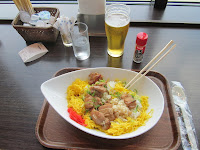 Around noon we got up and left to find some lunch. We found a bar that had food so we decided to have teriyaki chicken with noodles and rice. The food was delicious, and the cold beer tasted very good. We were a bit surprised by the cost of $40. It was good, but not that good.

Our next stop was at the American Airlines counter to see if we could get an isle seat for the leg from Tokyo to Dallas. The seats we had were the two center seats in a row of four, and we hoped to get one on the isle. We had no luck with that; however, the agent advised us that we could upgrade to business class. The amount was more than we wanted to spend, but Steve and I decided that it would be worth it for the 11-hour flight to DFW.

Knowing that we would be able to sleep on the next flight, we returned to our room, showered, and got dressed. We checked out two hours early and went to the Admiral's Club to enjoy WIFI, some food, and a drink.

At 5:30 p.m. we boarded the plane and settled into our wonderfully comfortable and wide seats. We spent the next 11 hours enjoying movies, a great dinner, and a glass of wine. We were able to sleep for several hours, and that made all the difference in the world.

We arrived in Dallas at 3:50 p.m. on July 7 and had just two hours before our flight left for Albuquerque. We went through Immigrations with no problems and proceeded to baggage claim to get our bags. We grabbed two trolley; however, they were smaller than the ones at KLIA, so we were worried about getting all nine bags on them. It took quite awhile for us to collect all of the bags, but they did fit, and as soon as we had them all, we went to Customs. We expected questions about so many bags so I had typed up a list of the contents of the bags in case the agent asked us. The Customs agent we got was very pleasant. We explained why we were returning to the states and why we had so many bags. All he asked was if we had any food. When we told him that we did not, he let us continue on. Thank goodness we didn't have to unload any of the bags. We never would have been able to repack them the same way.

We quickly rechecked our bags and headed for Terminal A to catch our flight. We had to wait just 30 minutes before we started boarding. There was a contingent of soldiers from Fort Hood, and I asked one of them if they were leaving or returning home. He told me that they were going to Albuquerque for some training and would then head to Afghanistan for another tour. When he told me that, I thanked him for his service.

Our last flight was just over an hour, and when we landed in Albuquerque, we were very ready to be done. We went out to the curb with our carry-on bags to wait for James and Zelda to pick us up. Steve then proceeded to pick up the bags two at a tiime and bring them out to the curb. Just as he finished with the last bags, James drove up in our truck, and we loaded all the bags into the back.

It felt so good to be home again. The mountains were beautiful as the sunset shone on them, and there were big thunder clouds all around. The weather was warm but not uncomfortable, and we enjoyed the ride home and caught up on the latest happenings.

We have spent the past few days trying to get over our jet lag and to adjust to being back in the states. We are waking up at four in the morning and can hardly stay awake by the afternoon, but things will improve over the next few days.

I plan to post one or two more blogs during the next few weeks, so keep checking in with us.
Posted by s/v Linda at 7:04 PM